One of the comforts of mystery and detective fiction is that there is an effort to discover motive and make it knowable. Greed, jealousy, fear, revenge, desire are all intelligible to the detective's eye. But we are sometimes confronted by events in which the motive is not merely lacking, but vacant, horrific.

I write this in reference to the mass murder in Christchurch on March 15, and because I was born and lived a large part of my adult life in Christchurch, and so it is the city I still regard as home, familiar ground, before all others. The Christchurch where I grew up, the city on the plain in the shadow of the sun-browned Port Hills, with its green, fragrant parks and quiet, windblown streets and patches of Neo-gothic stonework, has been altered and scarred by inevitable change and two severe earthquakes, but these are natural events as opposed to willful slaughter. 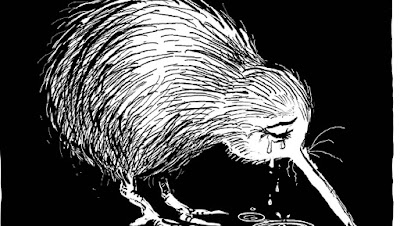 
Faced with a crime, we seek the motive in the first instance of shock and dismay. However, I no more mean to read or reference the shooter's "manifesto" than I mean to grant him the presence of mentioning his name. It's enough to read the summaries by those familiar with acts of terrorism and hate-crimes to realize that the same tired lies and malformed justifications repeat themselves again. In any case, the slaughter of innocent persons utterly vacates even the pretence of a reason. The shooter has no just cause to defend.

So, what remains? Jordan Peterson, for one, in the context of school shootings holds that: "“They make a display of their hatred for Being by massacring the innocent. That’s what’s happening — and they write that,” but this is generalizing to the point of uselessness. Mass murderers of this sort may indeed express a hatred for Being, but the beings they murder are, by their own choice, highly specific. Indeed, as Sri Lanka shows, the hatred is always targeted, rooted in bigotry and paranoia, from whichever side. Conrad, as usual, had the better sense of it, as in the end of The Secret Agent:

And the incorruptible Professor walked too, averting his eyes from the odious multitude of mankind.  He had no future.  He disdained it.  He was a force.  His thoughts caressed the images of ruin and destruction.  He walked frail, insignificant, shabby, miserable—and terrible in the simplicity of his idea calling madness and despair to the regeneration of the world.  Nobody looked at him.  He passed on unsuspected and deadly, like a pest in the street full of men.

The terrorist is not lost, nor does he lack purpose, but he measures his own worth by the ruin and destruction his fixed and futile ideas entail. He does not lack self-worth, but revels in his contempt for others. It is only that his self-aggrandizement is fixated on the power to negate other lives.

Conrad's concluding simile is apt. Terrorism is an infection. It is possible to identify the toxic ideologies that drive and support white nationalism. It's possible, as New Zealand shows, to restrict access to weapons that have no purpose in civil society, It's possible to call out the Internet trolls and the politicians, the pseudo-thinkers and the networks that lend tacit support to hate and bigotry. We can police the crime. And, in the long-term, we can plan to overcome the inequality and injustice in which hatred festers. But what we cannot do is lend a moment's credence to the supposed grievances and agendas of fanatics. Faced with this crime, the motive is void; only the pathology matters.
Posted by Andrei Baltakmens at 4:21 PM